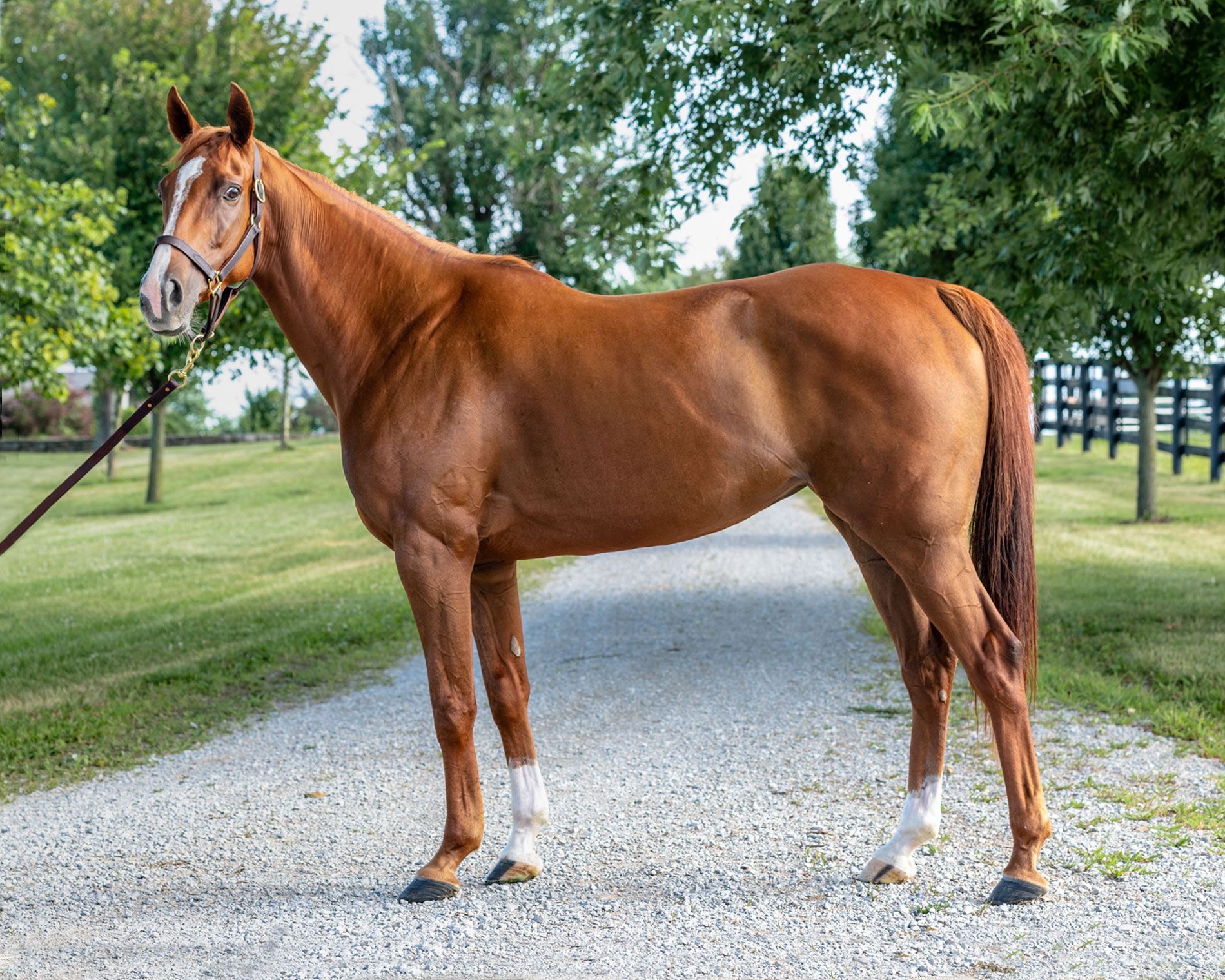 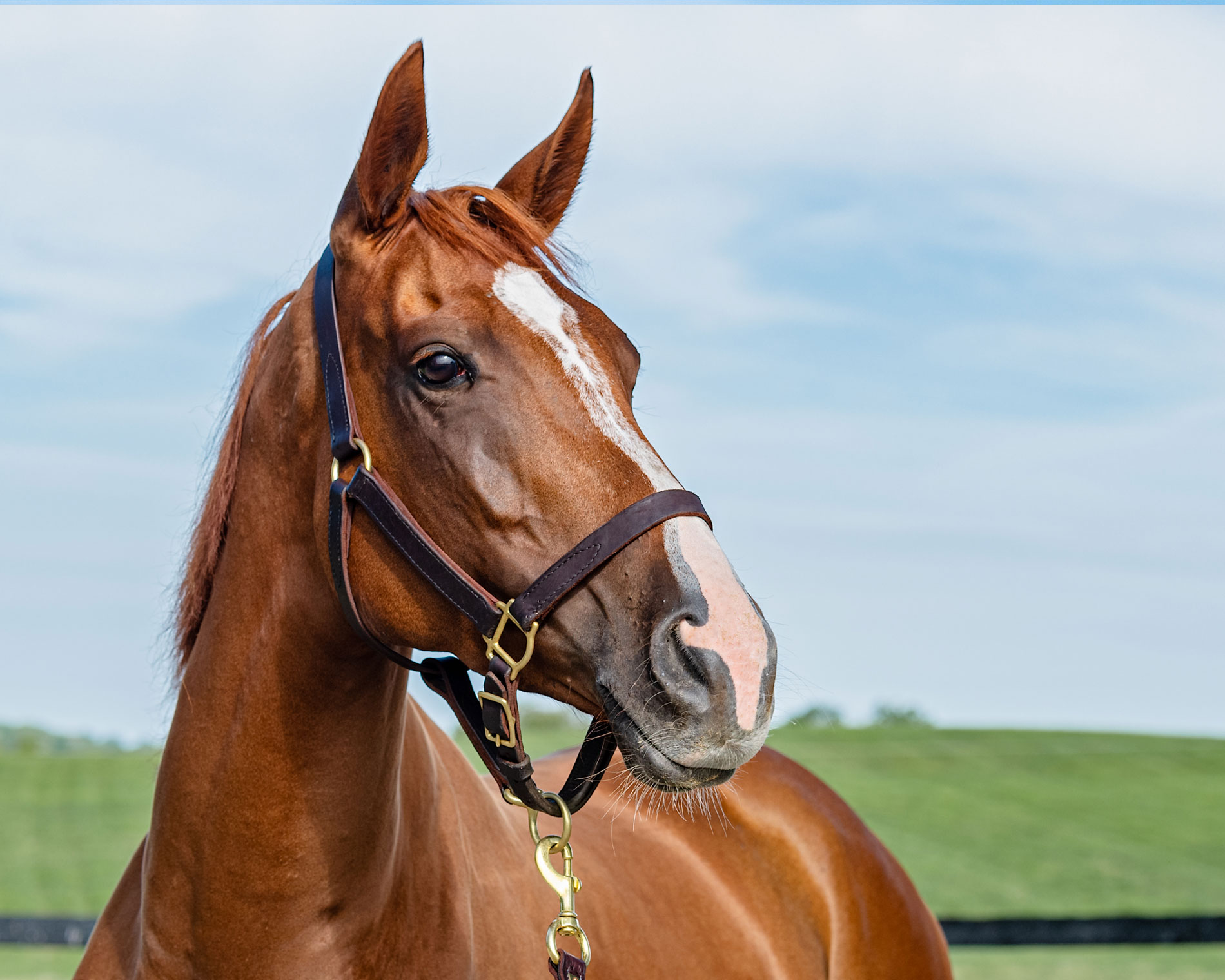 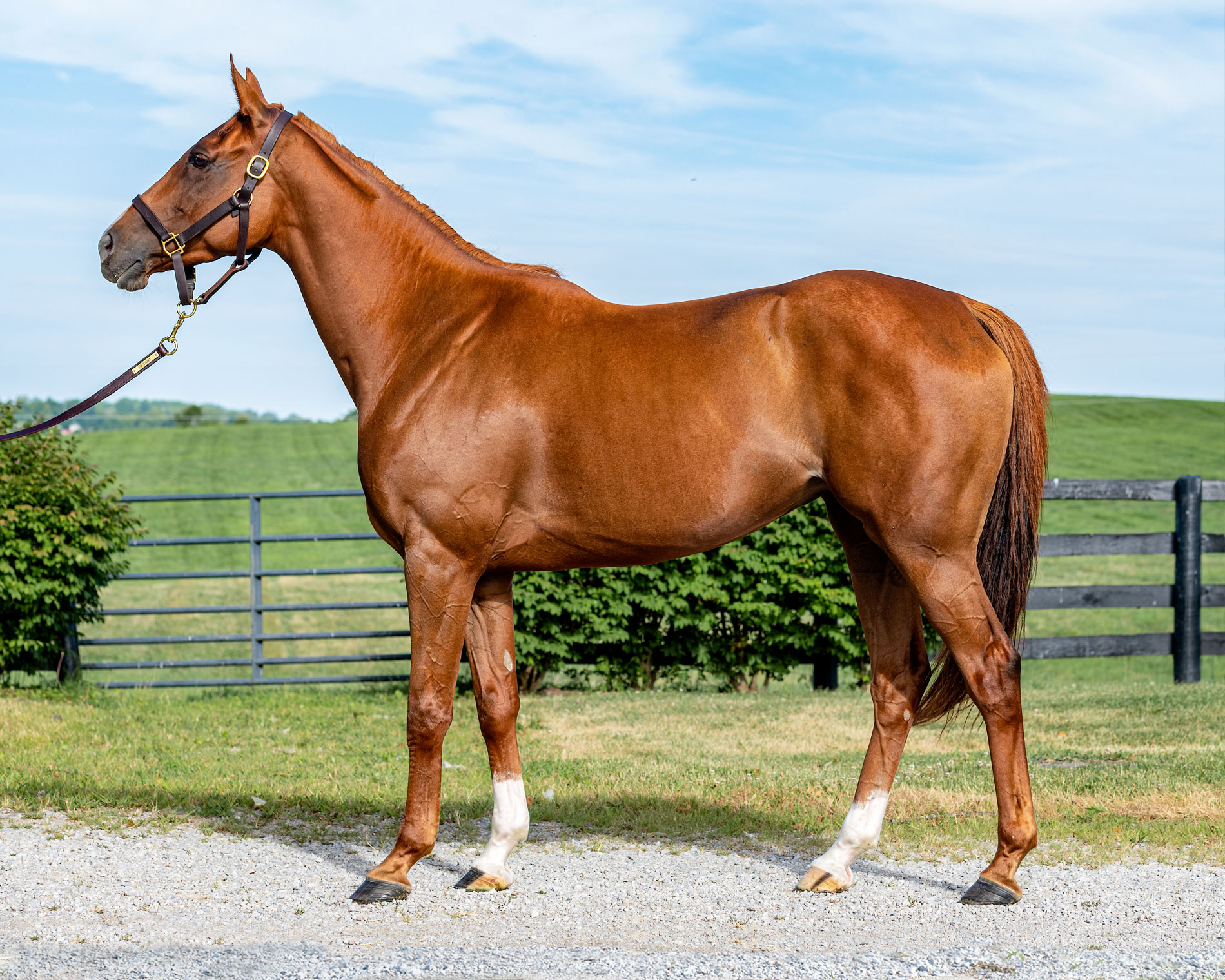 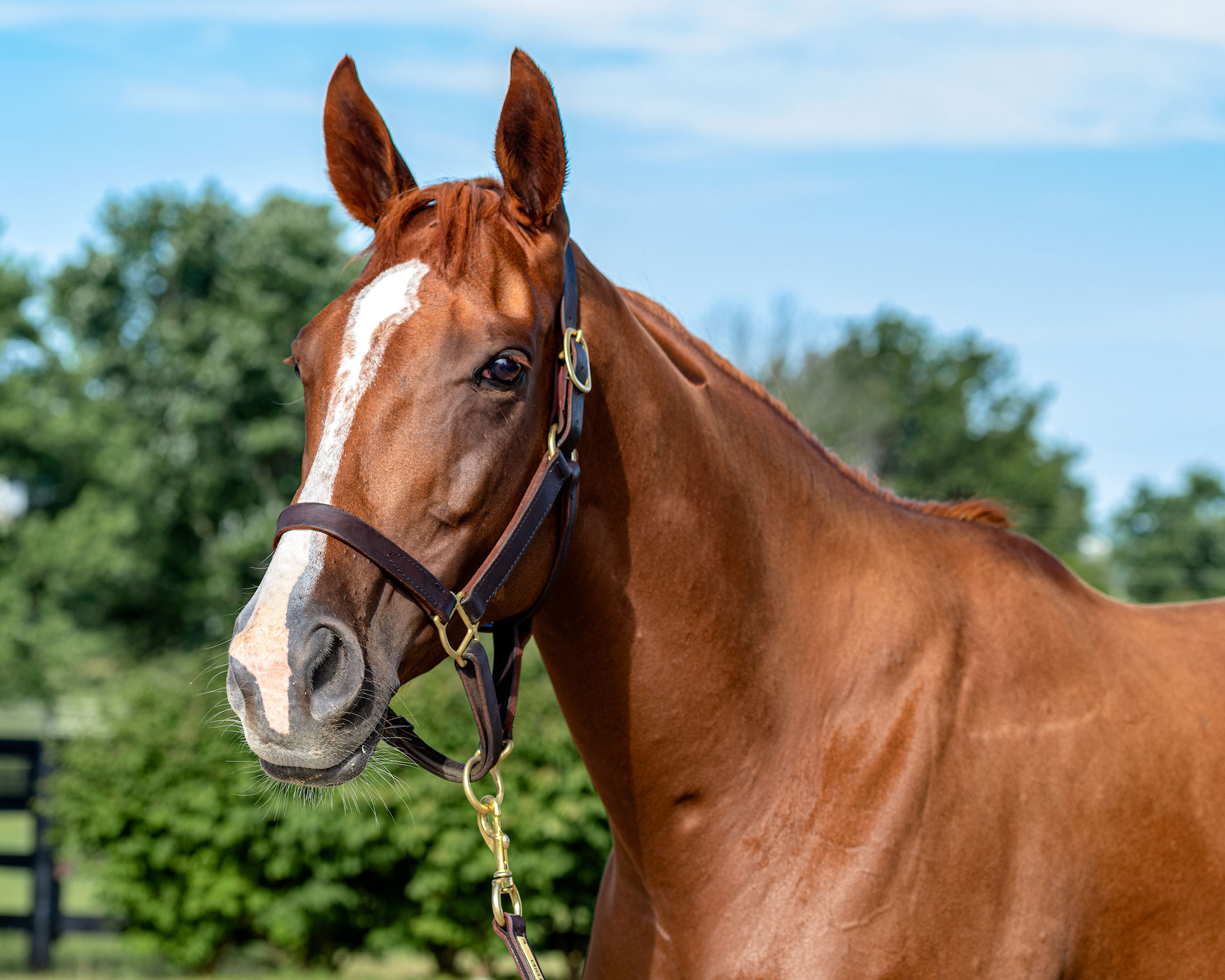 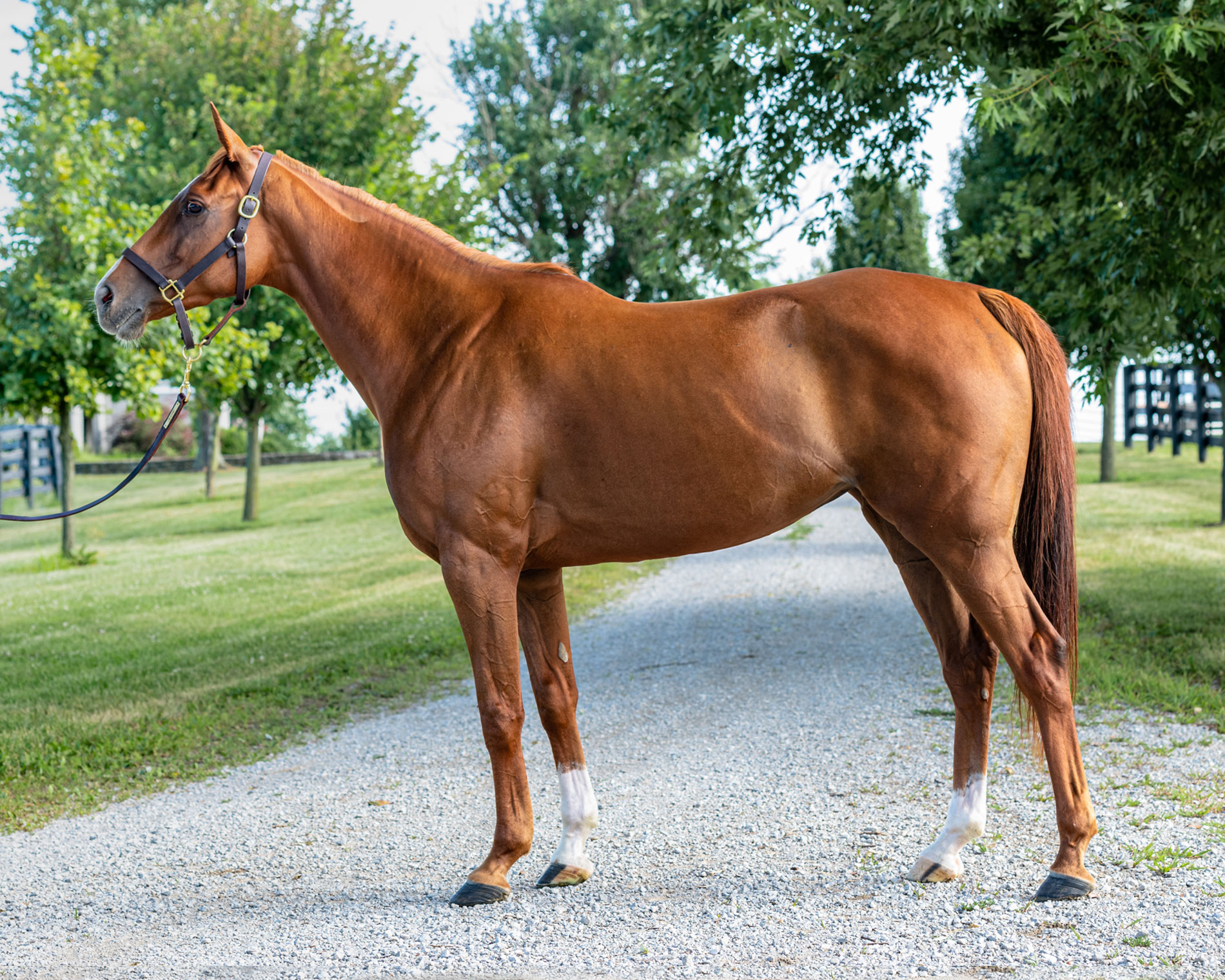 Schmiss is the latest addition to the Circle 8 arsenal. Despite a name that makes people smile, based on her looks and her family tree, top and bottom, we are of the opinion that Schmiss can't miss.

Her sire, Hard Spun, is a multiple graded stakes-winning son of the great sire Danzig. Hard Spun captured six stakes, including the Gr. I King's Bishop at Saratoga, while earning $2,673,470. He led for the first mile in the 2007 Kentucky Derby before finishing second behind Street Sense, and was nearly six lengths ahead of Curlin, who retired as the leading money-winning thoroughbred in North America with earnings of more than $10 million, until the $16 million Pegasus World Cup came along. Hard Spun then finished third behind Curlin and Street Sense in the Preakness, fourth in the Belmont Stakes, and second in the prestigious Gr. I Haskell, defeating Curlin by a head.

Hard Spun is a dual hemisphere stallion, siring nine crops of racing age. They include Questing, champion 3-year-old filly of 2012, and winners of more than 2,400 races. His runners have earned upwards of $90 million, and he's 12th on the current (through July 7) North American leading sire list with 2019 earnings of nearly $5 million. He is third on that list with 97 winners and is No. 1 with 39 repeat winners, seven more than the two stallions tied for second. He has five black-type winners who have won six stakes this year, three of them graded, one a Gr. I. He had a $950,000 yearling filly sell at Keeneland in September.

At the race track, Schmiss posted four victories, four seconds and eight thirds in 33 starts, an in-the-money percentage of 48.5, while earning $82,238. Her dam, Autumn Ash, is by Gr. I Wood Memorial winner Tapit, leading North American sire three times and sire of 122 stakes-winners, including seven champions. His runners have earned more than $144 million, and he's the sire of the dams of 20 stakes-winners.

Schmiss has three winning siblings, including five-time winners Swapl and Autumn Ember, and the Union Rags filly Fingerpaint, who sold for $250,000 at the 2017 Timonium sale. Schmisses' second dam, Crafty Ember, has produced eight winners, including Pampered Princess, winner of the Gr. I Juddmonte Spinster and seven other stakes.

It is our plan to breed Schmiss to Ashford Stud's good-looking gray stallion Cupid, the Gr. I-winning millionaire son of sire-of-sires Tapit. 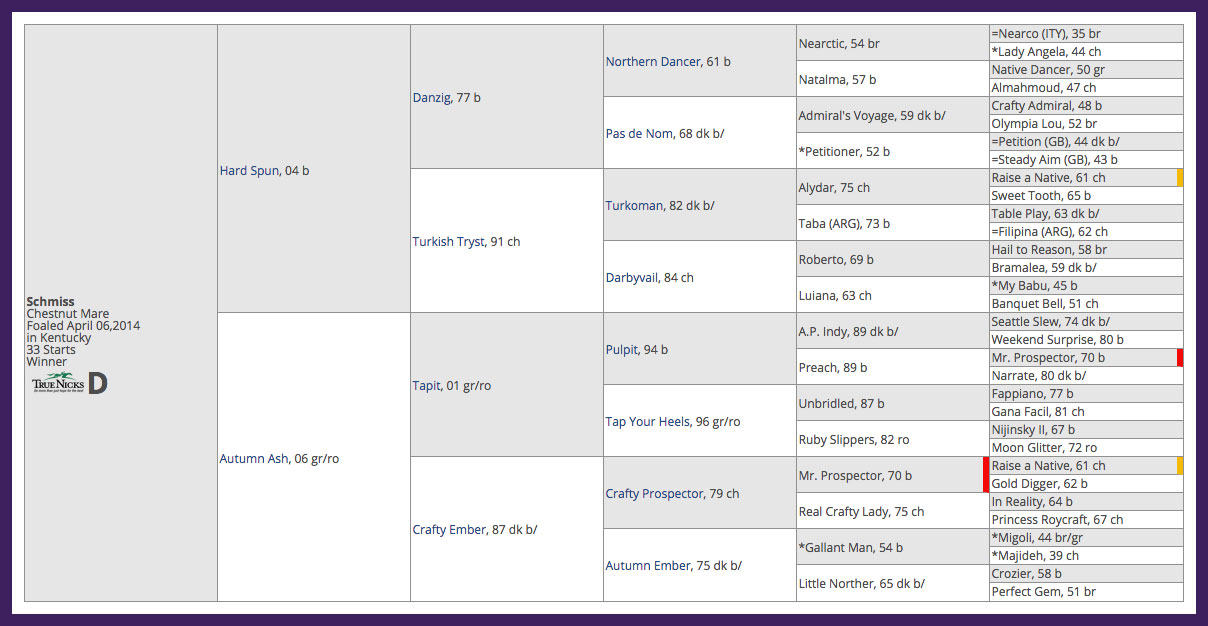